Ahead of the United Nations biodiversity negotiations that begin next week, a new report commissioned by WWF reveals that 39 million new jobs could be created if governments reallocated just one year’s worth of subsidies that harm biodiversity to a nature-positive stimulus instead.

The report, Halve Humanity’s Footprint on Nature to Safeguard our Future, includes modelling which shows how jobs could be created if the funds governments spend on subsidies for harmful activities such as unsustainable agriculture, overfishing and unsustainable infrastructure every year are diverted to nature-positive employment , meaning jobs that improve the state of  nature.

In 2020, the World Economic Forum through its Future of Nature and Business report projected that ‘nature-positive’ solutions could create 395 million jobs by 2030 and $10.1 trillion in business opportunity. Several countries have already embarked upon just transitions towards a nature-positive economy which offer valuable lessons and inspiration.

WWF’s new report, produced by Dalberg Advisors, predicts that distributing this stimulus among countries equitably,that is, according to population, not economic strength, – would create almost twice as many jobs via the former compared to the latter  (39 million vs. 20 million). An equitable stimulus would thus  protect more biodiversity  by helping create green growth trajectories for less developed producer countries.

The need to deliver an agreement to halt and reverse nature loss by 2030 has never been greater, yet WWF is concerned that the world is failing to adequately respond to the nature crisis, thereby also jeopardising our ability to tackle the climate crisis and endangering the resources we all depend on for business and our very survival.

More than half the world’s GDP – US$44 trillion – is highly or moderately dependent on nature. Global environmental change puts nearly US$10 trillion of economic value at risk by 2050 and could result in large-scale price rises in major commodities such as timber and cotton. For example, deforestation of tropical rainforests risks creating unstable weather patterns that could drastically increase water scarcity in affected regions. Similarly, the destruction of coral reefs (e.g., via trawler fishing) displaces vital breeding grounds for the regeneration of global fish stocks.

“The upcoming negotiations present an opportunity for world leaders - eighty-nine of whom have endorsed the Leaders’ Pledge for Nature committing to reverse biodiversity loss by 2030 – to step up and deliver on their commitments, instructing their negotiators to secure a transformational outcome,” says Lin Li, Director of Global Policy and Advocacy at WWF International. “The draft text under review contains many of the elements necessary to a successful nature agreement, but it fails to adequately address the drivers of biodiversity loss, most notably our broken food systems. Conservation measures alone will not give us a nature-positive world. WWF is calling for countries to adopt a milestone to halve the footprint of production and consumption by 2030 to commit to a future that does not just limit damage to nature, but actively safeguards and improves it for future generations.”

WWF believes that halving humanity’s footprint in areas such as land use and material footprint (the total amount of raw materials extracted to meet final consumption demands) matters as it will be a major step toward allowing humanity to reduce its demand for natural capital below the rate at which it naturally replenishes. This will enable a global economy in which both humanity and nature flourish. To achieve this milestone by 2030, the new report is recommending that governments implement catalytic policies in three broad areas: 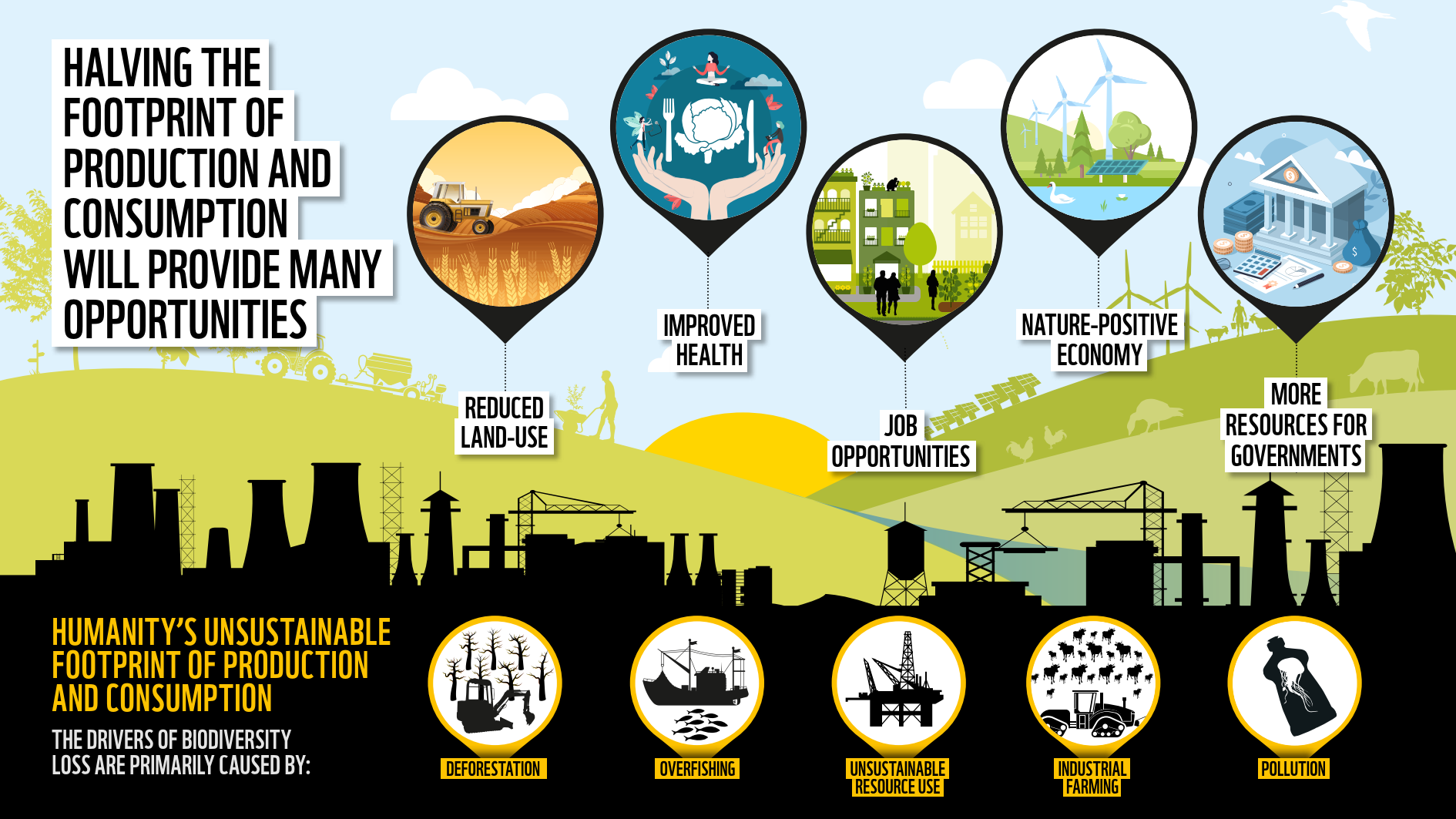 WWF believes that halving humanity’s footprint in areas such as land use and material footprint matters as it will be a major step toward allowing humanity to reduce its demand for natural capital below the rate at which it naturally replenishes.
© WWF

WWF believes that halving humanity’s footprint in areas such as land use and material footprint matters as it will be a major step toward allowing humanity to reduce its demand for natural capital below the rate at which it naturally replenishes.
© WWF