Businesses rely on nature for resources and ecosystems to thrive, but with biodiversity loss at a tipping point, the private sector has a role to play in not only protecting nature but reversing loss and restore the planet’s vital natural systems. Not an easy feat, but achievable with concerted efforts.

In the last decade corporations have been called on to take up measures to help achieve the sustainable development goals (SDGs) by 2030, with governments supporting the process through legislation but businesses have also been under pressure to ensure their processes and policies align with the goals, including their supply chains.

In light of this WWF and Boston Consulting Group (BCG) were keen to see what impact has been made and have published a report,   Deforestation and conversion-free supply chains: A guide for action which comes a decade after members of the Consumer Goods Forum (CGF) first committed to eliminating deforestation from their supply chains. It examines the barriers to and requirements for progress as well as exploring the role that businesses can play in halting deforestation and land conversion.

The report shows that increasing public awareness has put pressure on businesses to act, with many making voluntary commitments to act, however, the progress is not making the desired impact as less than half (41-46%) of companies are reporting on their commitments and even then, barely reaching the commitments made. Furthermore, the parts of the supply chain that have the power to affect the greatest change - processors and traders - have made the fewest commitments to date.

It shows that ecosystems most affected by businesses include forests, savannahs and grasslands continue to vanish at a rapid rate unless urgent action is taken.

Agricultural commodities contributed to a 39% loss of global tree cover between 2001 and 2015, with an average of 10 million hectares of forests lost every year driven primarily by agriculture. The report spotlights four key commodities namely; soy, palm oil, beef and wood fibre plantations, which were the focus of CGF’s zero net deforestation pledge in 2010.  The analysis also shows that cattle production has displaced the most forest by far, accounting for 37% of agriculture-driven deforestation between 2001 and 2015. It is also the leading force – with soy – behind the conversion of grasslands and savannahs, such as in Latin America’s Chaco and Cerrado regions.

Unfortunately, Soy, with the impact it has on deforestation has the least number of businesses making deforestation and conversion free commitments.  WWF is particularly keen to highlight this ahead of the Pre-Summit of the UN Food Systems Summit taking place at the end of July, which is calling for action on all levels of the food system to achieve Sustainable Development Goals (SDGs) by 2030.

It is evident that large companies must work together to persuade all the members of the commodity supply chain to make bolder collective commitments and implement concrete actions. There is a need to develop viable economic models for smallholders and hold third-parties accountable. And, perhaps most importantly, the need to enforce stricter mechanisms for tracing each commodity to its source and ensure a critical scale for impact is reached.

What the report has highlighted as critical is that voluntary commitments by businesses on their own remain insufficient to drive the change required. The report calls for greater leadership, transparency, traceability and verification by businesses, buyers as well as producers, alongside strong government legislation to ensure deforestation and conversion-free supply chains in addition to commitments by financial institutions to drive systemic change.

“Critical natural ecosystems are vanishing, yet we cannot survive as a planet without them,” said Fran Raymond Price, Forest Practice Lead at WWF International. “Companies have a critical role to play in halting and reversing the loss of nature, and it begins with making deforestation and conversion-free commitments a reality. Our new analysis shows that existing commitment schemes face hurdles of traceability and scale – and impacts are not following the pace that’s urgently needed. This must change quickly if businesses are indeed committed to contributing to a nature-positive world.”

Cristianne Close, Markets Practice Lead, WWF said: “Deforestation alone accounts for almost 10% of annual carbon dioxide emissions. Despite recognising the crisis, companies continue to fail to deliver on their commitments to deforestation and conversion free supply chains. We have decades of research and science, we've mapped supply chains, and we can measure deforestation in real-time. Now, platforms such as the Consumer Goods Forum must scale solutions that deliver systemic change. And financial institutions must support producers in the transition to nature-positive production so that no one is left behind.”

Joao Campari, Global Leader, Food Practice, WWF: “Although commitments by the private sector to transition to nature-positive food production are welcome, they have had limited meaningful positive impacts. That is because focus is mostly placed on minimizing the problem instead of transforming business models to deliver positive impact at the scale that is required to meet the 2030 Sustainable Development Goals. It is no longer enough to slow down the rate at which we impact nature and climate, we must change course to protect, sustainably manage and restore our planet. Businesses, particularly in the agriculture sector, must increase their sustainability commitments but they must be based on concrete actions that deliver systemic transformation at scale, with urgency.” 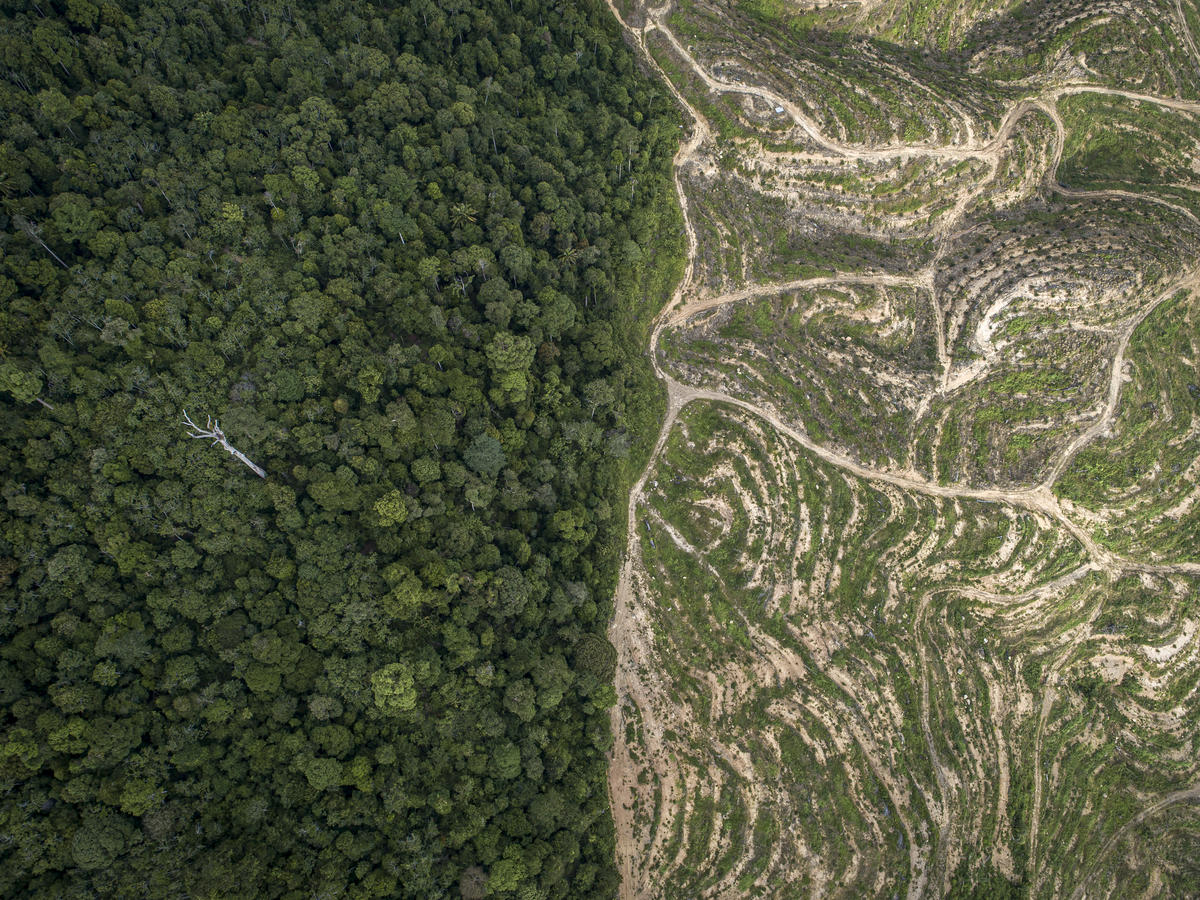 Aerial view of forest next to palm clearing in the Sabah Softwoods plantation in Sabah, Borneo, Malaysia. © Aaron Gekoski / WWF-US

Aerial view of forest next to palm clearing in the Sabah Softwoods plantation in Sabah, Borneo, Malaysia. © Aaron Gekoski / WWF-US