In collaboration with this morning's call from Pope Francis and senior faith leaders for urgent measures on climate change, faith groups reaching out to hundreds of millions of people across the world announced plans to significantly scale up action to protect the planet.

Building on decades of faith environmental action, they publicly commit to use their assets, investments and influence to mitigate climate change and create a better world, as part of the Faith Plans for People and Planet programme organised by the FaithInvest charity and WWF's Beliefs and Values Programme.

This is already the largest and most ambitious environmental initiative ever launched by the world's faiths – but is expected to grow even bigger in coming months. In addition to announcing its intentions, the Faith Plans partnership is today calling on more faith groups to get involved and join the movement.

In announcing this new collaboration just weeks before COP26, faith groups are signalling their intent to put these substantial assets at the service of people and the planet. Those committing themselves to developing Faith Plans manage billions of dollars in terms of buildings, land and financial assets – so the potential to advance genuine change is clear.

FaithInvest CEO Martin Palmer said: 'Faiths are key stakeholders in the planet. Globally, faiths run two thirds of schools, provide significant health services (the Catholic Church alone runs a quarter of the world's healthcare) and manage 8% of the habitable land surface of the planet including 5% of commercial forests. They are also one of the biggest investing groups on the global stock markets.’

Already scores of groups – from Ethiopia to China and from the United States to India – have pledged to develop Faith Plans. But many more are expected to join the Movement in coming months.

While faiths are now in the process of developing their Faith Plans, examples of proposed faith action include divesting from fossil fuels; establishing community forests; planting millions of trees; improving the energy efficiency of buildings; adopting renewable energies; and encouraging their members to adopt greener lifestyles, including greener transport for pilgrimages (among the world's biggest travel events).

Full details of the individual Faith Plans will be announced at the time of the Stockholm+50 meeting in June 2022. They will then be implemented over the following seven to 10 years, depending on the faiths' individual timescales.

Chantal Elkin, head of WWF's Beliefs and Values Programme, said: 'The United Nations' Intergovernmental Panel on Climate Change has issued a "code red for humanity". The science is unequivocal; we must act now to restore the planet, halt irreversible climate change and protect natural habitats – and faiths have a huge role to play in this urgent work.' 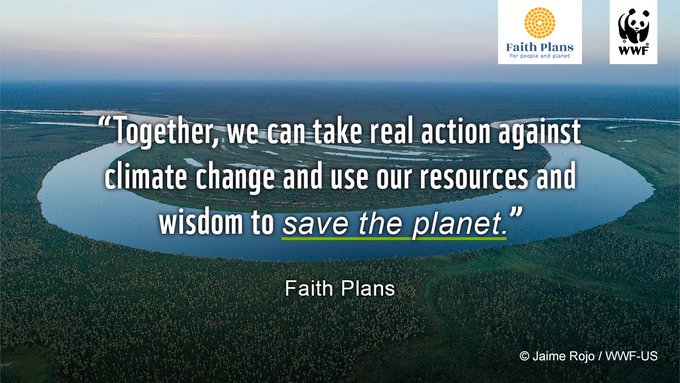