We’ve never gone through or seen anything like this in our lifetimes. As people and countries around the world grapple with the devastating impacts of the COVID-19 pandemic, a new survey in Southeast Asia and Hong Kong, commissioned by WWF, found overwhelming public support for a government-led closure of illegal and unregulated wildlife markets, which risk being potential sources for similar diseases in the future.

While questions remain about the exact origins of COVID-19, the World Health Organization (WHO) has confirmed it is a zoonotic disease, meaning it jumped from wildlife to humans, therefore bringing into sharp focus the potential risk wildlife markets can pose to human health and well-being. In such contexts, live and dead animals are sold along with different foodstuffs in close proximity, and should conditions be unsanitary, cross contamination is likely. Some previous epidemics have been linked directly to wild animals, for example with the SARS outbreak in 2003, the virus was transmitted from a bat to a civet to a human, but others, such as swine flu, originated in livestock, probably via a wild vector, such as bats. Tackling the issue is not easy or straight forward, but risks can be lowered.

“It is time to connect the dots between wildlife trade, environmental degradation and risks to human health. Taking action now for humans as well as the many wildlife species threatened by consumption and trade is crucial for all of our survival,“ said Marco Lambertini, Director General, WWF International.

In light of these risks, on 24 February 2020, the government of China placed a temporary ban on trade and consumption of wildlife and new research commissioned by WWF via GlobeScan shows people in Hong Kong SAR, Myanmar, Thailand, and Vietnam support similar actions by their governments.

In the first survey of its kind of public opinion undertaken across Asia about the connection between COVID-19 and wildlife trade, almost all (93% of) respondents in Southeast Asia and Hong Kong supported action by their governments to eliminate illegal and unregulated markets. At the time of asking (3-11 March), 82% of respondents from Hong Kong SAR, Japan, Myanmar, Thailand, and Vietnam stated being extremely or very worried about the COVID-19 outbreak.

“China has taken steps prohibiting the hunting, trade, transport and eating of wild animals, and Vietnam is working on similar directives,” said Christy Williams, Regional Director of WWF’s Asia Pacific program. “Other Asian governments must follow by closing their high-risk wildlife markets and ending this trade once and for all to save lives and help prevent a repeat of the social and economic disruption we are experiencing around the globe today.”

According to WHO, at least 61% of all human pathogens are zoonotic in origin - and wildlife trade is an aggravating risk in the spread of zoonoses. Closure of high-risk markets is an important first step towards reducing the risk of future zoonotic outbreaks and safeguarding people’s lives and well-being - these types of markets can often harbour endangered species and can carry a risk of the emergence and transmission of novel diseases.

WWF is encouraging governments to strengthen efforts to reduce demand for wildlife, raise public awareness and work with other countries, conservation organizations, the private sector and local communities to end the illegal wildlife trade. We stand ready to provide technical support for monitoring illegal wildlife trade and to help build law enforcement capacity to assist the effective closure of wildlife markets. As the global community responds to the ongoing pandemic, we have a chance to decrease the risk of future zoonotic outbreaks, and increase our chances for a healthy future for people and the planet.

Seize the moment, cease the markets!

Shut down illegal, unregulated and high-risk wildlife markets - and protect nature to protect ourselves. 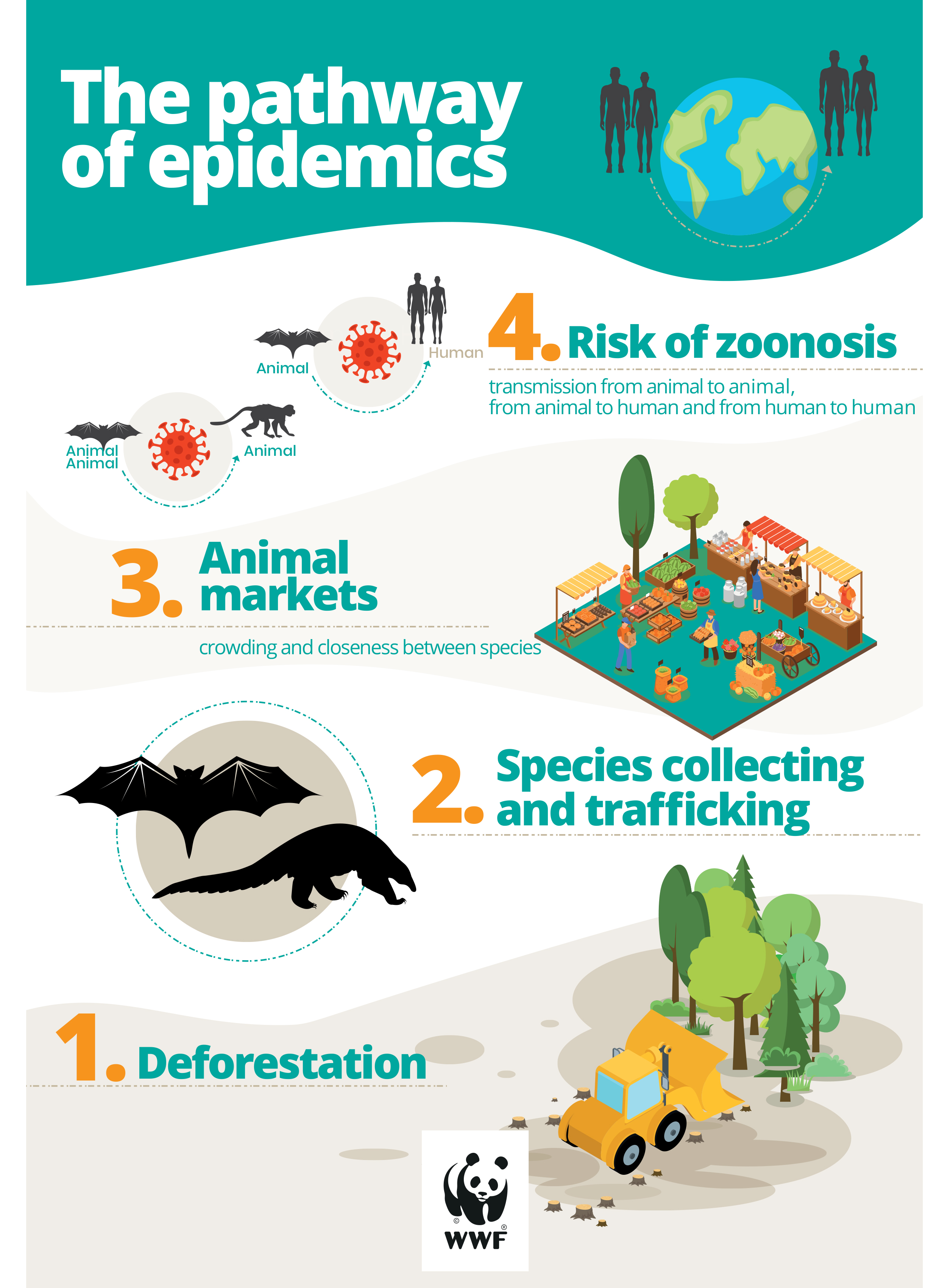