The hidden cost of plastic

Plastic pollution continues to be a menace to society. Just what happens to that plastic cup of coffee when you’re done with it and how much does it cost? How does it affect the environment - land, the ocean and biodiversity? 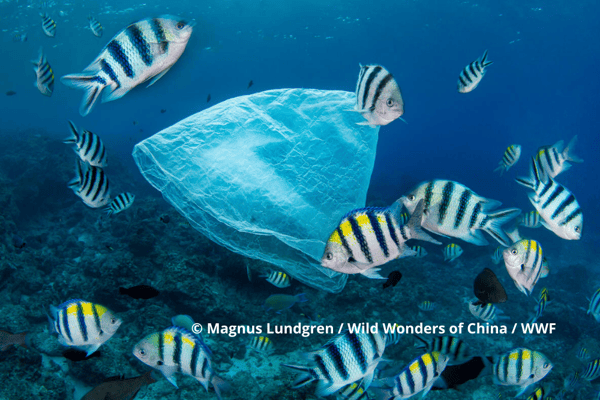 A new report by Dalberg commissioned by WWF reveals that the lifetime cost to society, the environment and the economy of plastic produced in 2019 alone was US$3.7 trillion - more than the GDP of India - and unless action is taken, this cost is set to double for the plastic produced in 2040.

As it stands, humanity now produces more than 200 million tonnes of plastic waste annually.  This is equal to around 523 trillion plastic straws which if laid lengthwise could wrap around the world approximately 2.8 million times. Close to half of this waste is mismanaged: openly burned, dumped directly or leaked into the environment and more than 11 million tonnes of plastic enter the ocean every year

The report “Plastics: The cost to society, environment and the economy” reveals that across the lifecycle, plastic is responsible for generating 1.8 billion tonnes of greenhouse gas emissions (GHG) a year. That is more than the annual emissions from aviation and shipping combined. These GHG emissions are accelerating the surge of climate-change-related negative impacts such as shrinking glaciers, flooding, and crop death from more intense droughts, imposing huge costs on governments and society. Mismanaged plastic waste could threaten the ability of the oceans to act as a carbon sink, further contributing to the climate crisis. Plastic could therefore be contributing to the climate crisis on two fronts, by emitting carbon dioxide and by limiting the ability of the ocean to remove this carbon dioxide, exacerbating the impact of the emissions.

Plastic pollution bares costs to all aspects of life:

While the necessary global actions to tackle the plastic crisis are known, current initiatives lack the necessary scale to drive systemic change and to address this crisis on a systemic level and reduce the cost that plastic imposes on society more effectively, WWF calls the governments to start the negotiation of a legally binding global treaty on marine plastic pollution at the 5th session of the UN Environment Assembly in February 2022. A global treaty must tackle all stages of the plastic lifecycle, stopping the leakage of plastic pollution into the oceans by 2030. As we wait for that, how about we stop using single-use plastics and make our planet a healthier place.