The overall declining trend of both African elephant species calls for increased support by donors and governments of the elephant range states to ensure that their populations start to stabilise and even begin a route to recovery.

The African savannah elephant and the forest elephant have now been classified as Endangered and Critically Endangered in the IUCN Red List of Threatened SpeciesTM. <Link to UCN website>. This comes after a recent decision by the African Elephant Specialist Group (AfESG) of IUCN that it will now treat forest elephants and savannah elephants, formerly considered the same species (African elephant) as two distinct species. Previously, the African elephant, has been assessed as one species and has until today, been listed as Vulnerable.

This means that both of the newly-recognized species are moving to a more threatened status, the African forest elephant is now listed as Critically Endangered and the African savanna elephant as Endangered. Following this reclassification, WWF and WCS have both called for continued and renewed vigilance, enforcement, anti-poaching efforts for all elephants in Africa - and particularly for the critically endangered forest elephant.

Since the Red List of 2008, the forest elephant, whose population comprises approximately only a quarter of all African elephants has always been known to be more endangered than the savanna elephants. One characteristic of forest elephant ivory is that it is harder than savannah elephant ivory. It was preferentially chosen by Japanese ivory carvers, as it can be carved into very fine detail.

Whilst governments like China have made great strides by closing their domestic ivory markets, banning raw ivory imports and increasing enforcement efforts, more needs to be done to reduce demand for ivory. In some parts of Africa the crash in tourist presence has presented a new threat of increased poaching because of the reduced income to maintain law enforcement efforts.

Besides the threat of international trade in ivory, an emerging threat for forest elephants, is also the change in the fruit production within their forest habitats. A study published in September 2020 found that climate change has resulted in an 81% decline in fruit production over the last thirty years (1986–2018) in Lope National Park - a very long-term research site- in Central Gabon. That has caused the elephants there to experience an 11% decline in body condition since 2008.

A 2016 study found that unlike savannah elephants, forest elephants have a slower reproductive rate, and a longer generation time (31 years) and start to breed at a later age and with longer intervals between calves than other elephant species, putting them under greater pressure from poaching, and making it extremely difficult to replenish declining populations.

Given the overall declining trend of both African elephant species, donors and governments need to increase support to elephant range states to ensure that their populations start to stabilise and even begin a route to recovery, and to support international efforts to stop ivory trafficking all along the chain, from the source in the forests and grasslands of Africa all the way to its destination, sometimes across the globe. 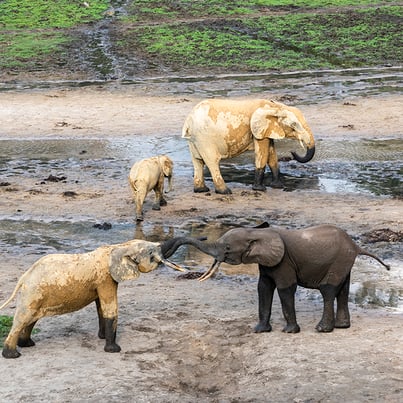